For the item in Corpse Party: Book of Shadows, see Paper Charm

Sachiko Ever After (幸せのサチコさん, Shiawase no Sachiko-san?, lit. "Sachiko of Happiness") is the name of the mystical charm found on Naho Saenoki's blog, "Naho's Nods to the Netherworld." Before Sachiko Shinozaki was appeased, performing this ritual incorrectly was the only key to entering the Nirvana. However, after her appeasement, this was replaced by the Everafter Stones.

According to Naho's blog, it is stated that this ritual is centered around a local folk legend from Tenjin. There, a young elementary schoolgirl named Sachiko went missing around 30 years ago. Even though she died within its grounds, it is said that her spirit still wanders the Earth, but she has been given powers to grant wishes and ease worries to others.

This ritual is intended to induce communion with Sachiko's spirit and, if performed correctly, Sachiko will pass through and grant the chanters her blessing. Those involved in the spell will be bound together as true friends for eternity. However, if the ritual is not performed exactly as specified, Sachiko may be angered which can only lead to trouble.

The charm requires a specifically designed paper Sachiko doll (サチコさん人形, Sachiko-san Ningyō?, lit. "Sachiko Doll"). This paper proxy represents Sachiko, this design is meant to be printed out on white paper and must remain completely blank.

In order to perform the ritual, at least two to ten participants are needed. With the paper Sachiko doll in hand, everyone needs to gather around in a circle and each individual must grip firmly onto the proxy doll.

Then they must invoke Sachiko by chanting the phrase in their head or aloud, "Sachiko, we beg of you" (「サチコさん（に）お願いします」, "Sachiko-san (ni) onegaishimasu"?), one time for each participant present plus once more for Sachiko herself. After chanting, everyone holding onto the paper doll pulls it apart, leaving each person with a paper doll scrap (サチコさんの切れ端, Sachiko-san no kirehashi?). It is suggested to keep this paper scrap on their person, such as putting it inside their student ID holder or wallet.

Succeeding in the ritual causes nothing to occur. However, performing the charm incorrectly either by repeating the phrase too many times or too few, invokes the wrath of Sachiko. It causes those involved to be dragged into Heavenly Host Elementary School, not to mention this ritual alone is the one responsible for sending countless souls to their inevitable demise.

Once brought into the accursed school, the scrap papers from the Sachiko charm are critical for escaping Heavenly Host. The remaining participants must join their paper doll scraps together and then perform the ritual once more, this time done correctly. Afterward, those involved will finally be able to return back to their own world. Furthermore, losing these paper scraps means the individual can never return home.

Spirit in the Everafter

The original form of the Sachiko Ever After charm is a ritual called Spirit in the Everafter (死遭ワセノ儀, Shi Awase no Gi?, lit. "Encounter Death Ritual"). Ayumi Shinozaki and Naomi Nakashima discover the paper doll proxy charms when they investigate the ghost-form of the Shinozaki estate. They are found inside a traditional household shrine alongside a mirror imitating the shape of Yata no Kagami (八咫鏡, lit. "The Eight Hand Mirror"). A note contains the instructions on how to perform the ritual:

Naho brought back one of the paper proxy dolls after she has finished her investigation of the Shinozaki estate, and posted about it on her blog. Ayumi conjectures that Yoshie Shinozaki used Sachiko as an offering to make Heavenly Host the land of her death, but the reason for Yoshie doing so is unknown. 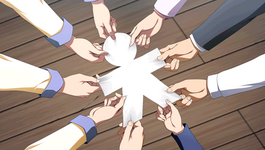 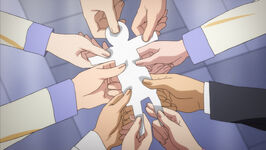 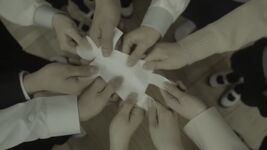 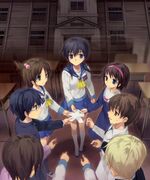 Classroom 2-9's students doing the Sachiko Ever After 's charm in Corpse Party: Book of Shadows

Community content is available under CC-BY-SA unless otherwise noted.
Advertisement