"Kisaragi" corresponds to February, the second month of the year in the Lunar calendar. The school's emblem shows a motif of plum blossoms that bloom in February. The flower's blossom symbolizes "hope," the bud represents "patience," and the branch stands for "bonds." The badge's ribbon is blue for high school, red for junior high school, and grey for the P.E. uniform. 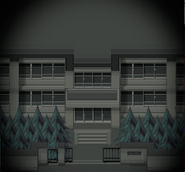 Kisaragi in the PC version of Corpse Party.