Corpseparty; Musume (コープスパーティー;娘, Kōpusupātī; Musume?, lit. "Corpseparty; The Girl") is a Japanese manga series written by Makoto Kedouin, illustrated by Mika Orie, and published by Media Factory from October 2010 to September 2012. The manga is an alternative story loosely based on the plot from the original PC-9801 version of CORPSE-PARTY with influences from Corpse Party.

All twenty chapters in the series were collected into three volumes, with the first volume released on December 22, 2011, and the third volume released on August 23, 2012. The chapters are all self-contained, usually dealing with the death of the main characters, and containing risqué imagery and scenes.

All three volumes of the manga were translated and published by Brazilian publisher NewPOP to Portuguese under the title Corpse Party: Musume.[1]

It happened after school one rainy day... A group of friends have stayed behind to prepare for the next day's school festival. One moment they are idly telling ghost stories but the next an enormous earthquake strikes and the entire school seems to fall down around them. They awake to find themselves trapped in a parallel version of their school. A school abandoned and disheveled and whose calendar dates back to 1927. Can they find a way out of this nightmare or are they doomed to the same fate that befell the other victims whose corpses that lie numerous throughout the school?

The majority of the cast of characters are a group of students from Kisaragi Academy. 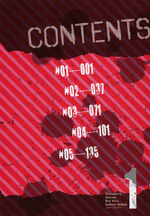 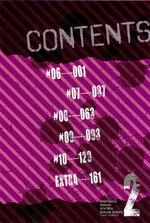 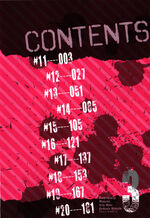 Volume 3 content page
Add a photo to this gallery

Retrieved from "https://corpseparty.fandom.com/wiki/Corpseparty;_Musume?oldid=70582"
Community content is available under CC-BY-SA unless otherwise noted.