The Book of Shadows is a dark, magical tome filled with instructions on how to perform various spells.

The book is crafted from human skin and animal hides, and has a skull design sewn onto the front cover. There are two scratch marks resembling two Fuþark (Futhark) runes, Ansuz and Hagalaz, on the upper left and bottom right corner of the cover respectively.

The contents of the book contain instructions on numerous spells and rituals written by witches of the olden days. Due to many Witch Hunts killing off Witches, magic was shunned. In order to ensure that all knowledge of magic was not forgotten, they created the Book of Shadows and passed it down from generation to generation.

The book eventually ended up in the possession of Yoshie Shinozaki, and remained in the hidden basement of her home long after her death, only to be found later by Ayumi Shinozaki and Naomi Nakashima.

The Book of Shadows

The book "laughing"
Add a photo to this gallery

Yuki Kanno with the book.

Page in Book of Shadows

Magari Mizuki holding the book after the death of Misuto Kiriya

The Book of Shadows as the game icon for Corpse Party: Blood Drive 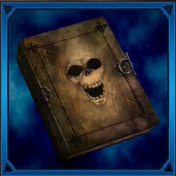 Book of Shadows as an item

Retrieved from "https://corpseparty.fandom.com/wiki/Book_of_Shadows?oldid=77605"
Community content is available under CC-BY-SA unless otherwise noted.